Check the Authenticity of your SM Engine Parts!

The background a lens effect is incorporated. Bright beams of light appear to converge on, and diverge from, a virtual point beneath the surface of a design. When viewed using a bright lamp, the beams of light can be seen as spectra of colors. The effect is visible over an extremely wide range of viewing angles.

The text "SM GERMANY PRECISION-PARTS" and the contour of the map of the world appear bright and colorful under an extremely wide range of viewing angles.

In the lower rectangular area various shades of grey can be seen in the central viewing position. When the sample is tilted left and right, that is, about the vertical axis, the shades of grey are seen to vary and the fitting of the rectangle appears to change dramatically.

This effect is superposed over area of the lens effect in a second independent plane. When the TRUSTSEAL® design is tilted strongly forward, the text "SM MOTORENTEILE" appears bright against a dark background.

When the TRUSTSEAL® in the oblique position is rotated by 90°, the contrast will flip; the background now appears bright while the text "SM MOTORENTEILE" is dark.

The three-digit control number appears dark in contrast in nearly all viewing positions. By tilting the TRUSTSEAL® security device about the horizontal axis and viewing the sample at an oblique angle, the design element appears in a bright blue-green color. 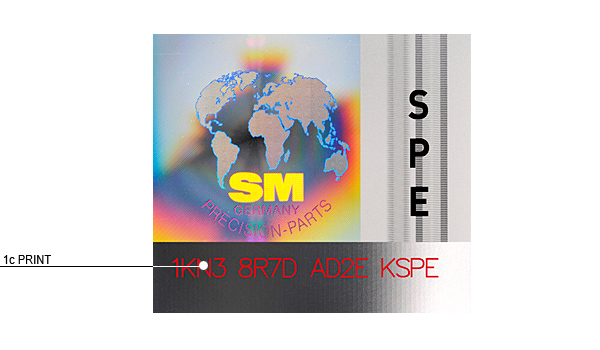